When Isis opened on 5 January 1677 at the royal château of Saint-Germain-en-Laye, it had less success than the four previous operas by Quinault and Lully; it also provoked strong reactions. In 1677 Françoise de Rochechouart-Mortemart, marquise de Montespan, had been the king’s mistress for the past ten years, and Louis XIV had recently become infatuated with Marie-Élisabeth de Ludres, known as Madame de Ludres, one of the marquise’s filles d’honneur. The connection was immediately made between the scandals at court and the plot of Isis, in which the unfaithful god Jupiter arouses the bitter jealousy of his wife Juno through his courtship of the young nymph Io. The performances were suspended, and for two years Quinault was banished from the court.

Royal displeasure thus prevented the opera from having the success it deserved, for scandal aside Isis is a remarkable work. The libretto includes a series of unusual and extraordinary events, with the story of Pan and Syrinx (and the origin of the god’s famous pipes), Mercury turning Hierax into a bird of prey, and Io transported by the Fury to extreme climes to suffer freezing cold and searing heat. Lully’s music shows great refinement. The musical structure of the pieces is finely tuned to the action, good use is made of recurring motifs, and he invents very effective descriptive processes – in particular, the imitation of the shivering of the people of the frozen regions in Act IV, which later inspired composers such as Purcell, Vivaldi and Salieri. Lully’s depiction of feelings and characters in the opera is original and full of verve. 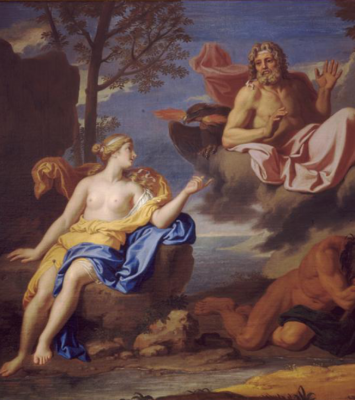 Prologue
In her palace, Fame (La Renommée) sings of “the triumphant valour of the greatest of heroes” (Louis XIV). Arriving from the sea, Neptune refers to the king’s recent victory (the French naval victory of 1676 over the Dutch and the Spanish in the Franco-Dutch War). Apollo, the Muses and the Arts arrive from the heavens: they are preparing a new celebration for the king.

Act I
Hirax is in despair at the indifference now shown to him by the nymph Io. In an effort to console him, his friend Pirante reminds him that he has the support of Juno. Io vainly assures Hierax of her constancy, but soon afterwards confesses to her confidante Mycene that his fears are justified: the messenger of the gods, Mercury, has told her that Jupiter is in love with her. Jupiter himself appears, accompanied by a Chorus of Divinities.

Act II
Jupiter envelops the earth in cloud in order to conceal Io and himself from the jealous eyes of his wife Juno. The nymph finds it hard to resist the advances of such an illustrious suitor. Mercury warns them that Juno has sent Iris to keep an eye on him, and that Juno herself may follow. Jupiter tells Mercury to detain Iris, while he follows Io. Mercury pretends to woo Iris, and for a while they flirt, but Iris is no dupe. Juno gets the better of her husband by taking Io into her court. The nymph is received in the gardens of Hebe.

Act III
Juno has given Io into the charge of Argus, a fine watchman, with the ability to sleep with some of his hundred eyes and keep guard with the rest. Argus will let no one see Io, not even his own brother. He reveals to Hierax the identity of his rival. On Jupiter’s orders, Mercury has the sad story of Pan and Syrinx enacted for Argus. When Argus begins to doze, Mercury approaches and puts him to sleep with a touch of his magic wand, then uses it again to release Io. They are about to flee when Hierax intervenes and wakes his brother. Mercury strikes them with his wand: Argus drops dead and Hierax is turned into a bird of prey, which flies away. Juno arrives in her chariot. She revives Argus and changes him into a peacock, before summoning up a Fury and ordering her to punish Io in a manner befitting her wrath.

Act IV
Io is subjected to various vindictive torments: bitter cold among the people of the icy region of Scythia, intense heat in the Chalybian forges, and finally she is taken to the cavern of the Fates. She beseeches their followers (War, the Frenzy of War, Violent and Languishing Illnesses, Famine, Fire and Flood) to end her life, but is told that only the three Fates can make that decision. The cavern opens and they emerge. They decree that the nymph must placate Juno if she wishes her sufferings to cease.

Act V
Io has tried to commit suicide by throwing herself into the sea, but the Fury has saved her. They are now in Egypt. The nymph implores Jupiter to end her torments. Moved to pity, the god descends from the heavens. He confesses that he cannot thwart Juno, and must follow the law of Destiny. Juno in turn comes down to earth. Jupiter pleads with her on Io’s behalf and swears by the dark waters of the Styx that if the goddess ceases to make her suffer such misery, “her eyes will trouble no more the blessed peace of our hearts reunited”. In the end, Io is raised to the rank of the immortals, becoming the goddess Isis, venerated by the people of Egypt.

When it was first performed Isis encountered major difficulties. Royal displeasure was one of them: the plot of Quinault’s libretto was seen as representing the jealousy of the king’s maîtresse en titre, Madame de Montespan, faced with her younger rival, Madame de Ludres. Jupiter thus became Louis XIV, Io Madame de Ludres, and the cruel and irascible goddess Juno was seen as representing the marquise. This was clearly a role that did not appeal to her, for she played an active part in seeking a new librettist for Lully, and for the next two years Quinault was in disgrace. It is also likely that Lully’s enemies, of which he had many because of his monopoly of musical theatre, made a concerted effort, in the form of a cabal, to prevent the work’s success.

Both audiences and critics nevertheless continued to admire the music. “This is the most savant of Lully’s operas,” wrote Lecerf de la Viéville, “and the one over which he took the greatest pains for its performance at court; the many instruments, played by the most accomplished musicians of the time, contributed not a little to bringing out the beauty of the music.”

Pan’s lament (“Hélas, hélas, quel bruit!”) imitating the sound of the wind in the reeds, the shivering chorus (“L’hiver qui nous tourmente”), the admirable trio for the Fates (“Le fil de la vie”), and Io’s lament (“Terminez mes tourments”) at the beginning of the last act, are among the outstanding pieces that fully justify the description of this beautiful work as “l’opéra des musiciens”. 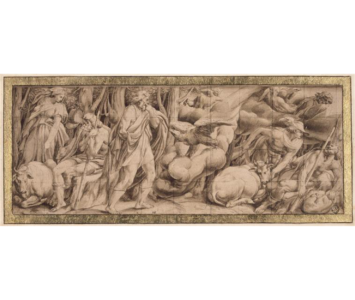 Key moments in the work

The main body of the opera

A key to the voices: 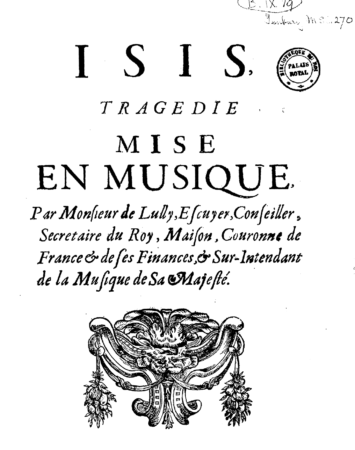 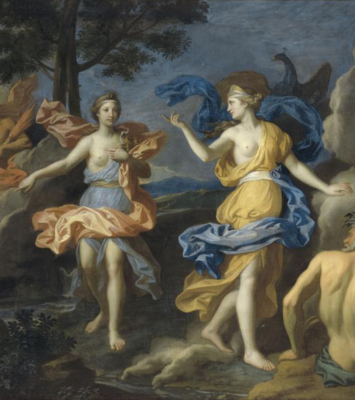 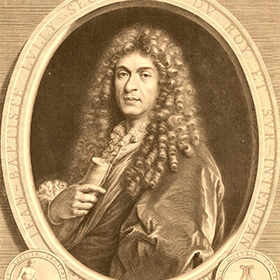 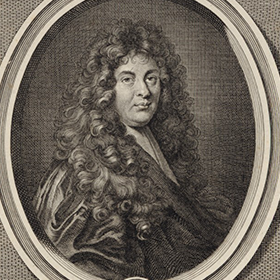 The French poet, dramatist and librettist Philippe Quinault was born in Paris in 1635. He was the son of a master baker. This explains why those hostile to Quinault and Lully referred to them as being “faits de la même farine” (lit. made with the same flour).

Lully and Quinault appear to have worked together as early as 1660. The poet is believed to have written material for various mascarades and ballets. He wrote the libretto for La Grotte de Versailles, a “musical eclogue”, first performed at Versailles in 1668, and provided the texts for the intermèdes of Psyché (a tragédie ballet of 1671), while Molière and Corneille provided the spoken texts. It is possible even that he made a contribution to Bellérophon, a tragédie lyrique by Corneille and Fontenelle, which was performed at the Académie Royale de Musique (the Paris Opéra) in 1679. The latter shows the beginning of his return to favour after the scandal of Isis in 1677.

From 1672 onwards, Quinault was, so to speak, France’s official librettist. He was to be the sole author of eleven of Lully’s tragédies lyriques.

Lully and Quinault were the inventors of a new genre, which necessarily had to be differentiated from the Classical model: a tragédie en musique (another name for the tragédie lyrique) could not reasonably be written in the same way as a tragédie performed as a play, like those of Racine or Corneille.

First of all, the text had to be shorter in order to leave room for the music. The lines needed to be more rhythmical, more musical. The words chosen also had to be shorter. The systematic use of French alexandrines (lines of 12 syllables, divided by a medial caesura into two hemistichs of six syllables each) would have limited the rhythmic possibilities and made the work too monotonous. Quinault skilfully combined 12-syllable alexandrines, with decasyllables, octosyllables, hexameters, and even uneven lines. Opera also required a variety of situations in order to diversify not only the sets and machinery, but also the subjects to be described by the music. Thus, Quinault began to introduce atmospheres that were alien to spoken tragedy. The influence of the pastorale and the ballet de cour made itself felt with the appearance of nymphs, shepherds and allegorical figures among the characters. Quinault also included the supernatural and magical themes in his works. His early operas, Cadmus & Hermione and Alceste had included comic scenes but, under pressure from the critics, he subsequently gave up that light tone completely: humour was to be found in the works of the Italians Luigi Rossi and Francesco Cavalli, but it was not in keeping with le bon goût français.

The literary debate by no means affected the popularity of Lully and Quinault’s works. The simplicity of the words made it easier to memorise the tunes, and Parisians could be heard humming them in the streets.

A typical orchestral opera score by Lully consists of 5 parts:

In addition, Isis requires trumpets paired with timpani, and a musette.