bg
Discover the season of 2021-2022
It's the 30th anniversary of Les Talens Lyriques
Download the brochure of 2021-2022
Upcoming concerts
Esterhaza 1750 : Werner / Haydn
MORE INFORMATION
Upcoming concerts
La Calisto
MORE INFORMATION
New release
Ballet royal de la Naissance de Vénus
MORE INFORMATION
WELCOME TO OUR WEBSITE!
VOIR L’AGENDA
January 2022
February 2022
March 2022
May 2022
June 2022
DISCOVER OUR DISCOGRAPHY
Ballet royal de la naissance de Vénus Jean-Baptiste Lully (1632 - 1687)
Written at the request of Louis XIV in honour of his sister-in-law, Henrietta of England, Le Ballet royal de la Naissance de Vénus was performed in 1665 with Henrietta herself as the goddess of love and youth. In twelve entrées, this grandiose spectacle combining dancing, music and poetry served the power of the king, while attesting to the magnificence of his court. Musically very inventive, it shows the culmination of the ballet genre, on which Lully was to draw in creating the tragédie en musique. To complete the programme, excerpts from Le Ballet royal des Amours déguisés (Armida's famous lament "Ah! Rinaldo, è dove sei?"), Psyché, Le Bourgeois gentilhomme and Le Carnaval - from the latter a piece recycled from Les Noces de village, a burlesque aria sung by the boastful village schoolmaster Barbacola, a basso buffo role that Lully wrote for himself. 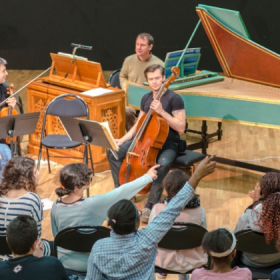 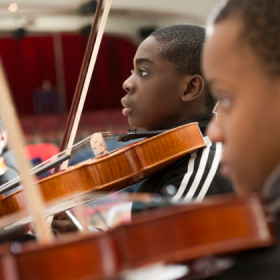 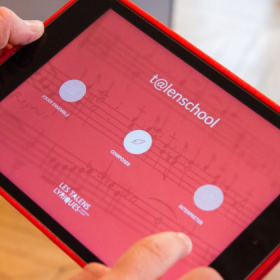 T@LENSCHOOL
The ensemble’s residencies in secondary schools are part of a long-term, multi-disciplinary project that is not only original, but also ambitious: commented rehearsals, encounters and musical practice are perfect ways to discover music, singing, dance… 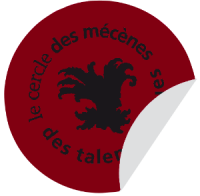 OUR SUPPORTS
Become a Partner !
By becoming a sponsor of Les Talens Lyriques, you support actions leaded by innovation, sharing and excellency !
LEARN MORE
The ensemble Les Talens Lyriques
which takes its name from the subtitle of Jean-Philippe Rameau’s opera Les Fêtes d’Hébé (1739) was formed in 1991 by the harpsichordist and conductor Christophe Rousset.

Championing a broad vocal and instrumental repertoire, ranging from early Baroque to the beginnings of Romanticism, the musicians of Les Talens Lyriques aim to throw light on the great masterpieces of musical history, while providing perspective by presenting rarer or little known works that are important as missing links in the European musical heritage. This musicological and editorial work, which contributes to its renown, is a priority for the ensemble.